Luna’s Survivor Story: New Beginnings – A Place of Her Own

Trigger Warning: domestic violence, suicide attempt, animal abuse, threats of rape, threats of murder. “John and I met on a dating app. I was in a dark mental place, and he looked exactly like my favorite musician. It seemed like it was meant to be,” Luna began. “He lived out of state and one weekend, […]

Ruthie’s Survivor Story – Reaching Out and Finding Hope Within

“I used to worry someone was going to say ‘This isn’t what we’re here for. We’re here for real abuse.’ But no one at WC&S ever said that to me.” “I started to realize something was wrong when I saw a WC&S flyer at a doctor’s office. It asked ‘Does your partner check your social […] Listen in as Hannah tells her survivor story. This video was shown during Celebrating Survivors 2021. “There is always somebody there to help you with whatever you’re going through. Whether it’s mentally, financially, or physically, they are there. I learned that you’re not alone.” Listen as Camillia tells her story of hope. Michael experienced emotional, physical, and sexual violence at the hands of his ex-wife for over 3 years. It would take 15 years to understand what happened to him. Aubrey’s abusive ex-husband took their child and then manipulated law enforcement and criminal justice systems into believing that she was the perpetrator of violence in their relationship. In Her Words: DV Survivors Speak about Women They Honor

At Women’s Center & Shelter, we celebrate women every day. In recognition of International Women’s Day, WC&S talked to DV survivors about women that inspire hope in them. ‘Domestic abuse.’ Think about those words. Now, close your eyes for a moment. Picture the first image that came to mind. Did you see a fist? Or perhaps a bruised face? Maybe an inebriated, pot-bellied man in a dirty sleeveless shirt grabbing the arm of his wife as she struggles to escape his grasp? I […] 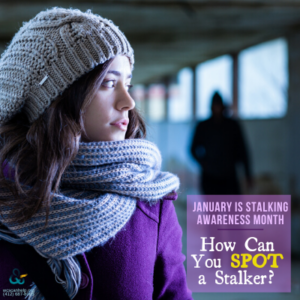 January is Stalking Awareness Month: How Can You SPOT a Stalker?

Hey…you. After a long week, you decide to spend Friday night journaling at your favorite café while sipping earl grey. The cupcakes look decadent so you bend down to select the one in the back with the sprinkles. Cupcake in hand, you rise and turn and bump into the guy behind you. You apologize for […] Domestic Violence Affects Children When it comes to domestic violence, children are often the forgotten victims. Whether or not the violence is taken out on children, simply witnessing it can have deep, lasting effects. In the US, more than 15 million children live in homes in which domestic violence has happened at least one time. […]